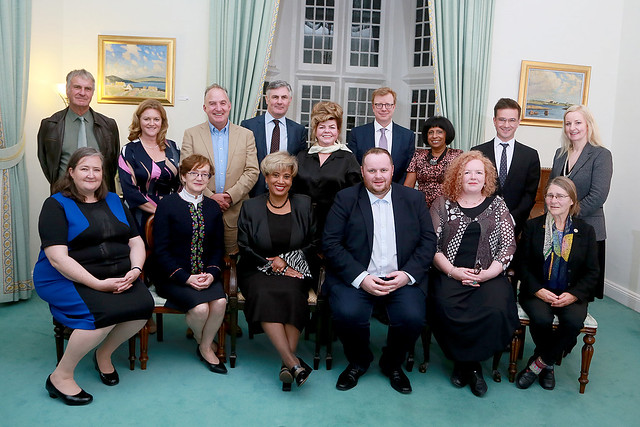 Justice Theron was born in KwaZulu-Natal on the east coast of South Africa.   She attended Natal University from 1984 to 1988 where she completed a Bachelor of Arts and a Bachelor of Laws.   In 1989 she was awarded a Fulbright Scholarship by the American Government to study in the US.   She obtained a Master of Laws degree from Georgetown University in Washington DC in 1990.   Whilst she was in the States, she worked for the International Labour Organisation in Washington DC and for a firm of attorneys in Los Angeles.

On her return to South Africa at the end of 1990, Justice Theron practiced as an advocate and also lectured at the University of Natal.  In 1995, she was appointed by former President Mandela as a member of the Judge White Commission which was tasked with assessing various contentious decisions that had been taken in the Public Service.  On 15 October 1999, she was appointed as a Judge of the High Court.  At the age of 32, Justice Theron was the then youngest judge in the country and was the first black female judge to be appointed in the province of KwaZulu-Natal.  After serving as a High Court Judge for eleven years, Justice Theron was appointed as a Judge of the Supreme Court of Appeal.  She was the then youngest member of the Supreme Court of Appeal.  On 1 July 2017,  Justice Theron was appointed to the Constitutional Court, which is the apex Court in the Republic of South Africa.  Justice Theron’s rise from humble beginnings in a poor segregated township in South Africa, to the highest court in the land has been described as nothing short of spectacular and as an achievement against all odds.

Justice Theron is well known for a number of leading judgments and, in particular, for her fierce defense of women’s rights.  In 2008, she handed down a seminal judgment in the KZN High Court in the matter of Gumede v President of the RSA.  Justice Theron ruled that certain statutory provisions which discriminated against women who were married under African customary law were unconstitutional as they constituted unfair discrimination on the grounds of race and sex.  Her judgment was later upheld by the Constitutional Court.  Whilst acting at the Supreme Court of Appeal, Justice Theron wrote a powerful dissent against the majority judgment in State v Nkomo who had reduced the sentence of a convicted rapist.  In doing so, Justice Theron emphasized the need for Courts to be mindful of their duty to send out a clear message to potential rapists and the community that they are determined to protect the equality, dignity and freedom of all women.  In a groundbreaking judgment on racism in the workplace, Justice Theron recently wrote a unanimous judgment on behalf of the Constitutional Court in Rustenburg Platinum Mine v SA Equity Workers.  Her judgment sets a precedent for the proper approach to sanctioning racist remarks in the workplace. Even more recently, Justice Theron’s majority judgment in Buffalo City Metropolitan Municipality v Asla confirmed that organs of state and private parties contracting with the state no longer have the protection afforded by time bars to escape the consequences of patently unlawful and invalid contracts.