From Paris to Athy: The origins of Grand Prix motor racing

Analysis: In 1903, Ireland became the first place to host an international motor race outside of France, the racetrack consisting of a figure '8' centred on Athy, Co. Kildare.

What is widely held as the first ever automobile race took place between Paris and Rouen on 11 June 1894 was actually a trial intended to assess the reliability of the recently invented motor car.

A "significant" crowd of curious onlookers turned out at the Porte-Maillot to witness the start, and of the 102 entrants, 21 appeared on the start line and 17 made it to the finish.

The Comte de Dion, on a steam engine of his own invention, crossed the line first, covering the distance of 127km in six hours and forty-eight minutes at an average speed of just over 18km/h, including a lunch-stop.

The inaugural Paris-Bordeaux-Paris race the following year was won by Emile Levassor on a Panhard in a time of forty-eight hours and forty-eight minutes (24.5km/h), an achievement commemorated by a statue located at the start/finish line on the Place Porte-Maillot in Paris (near today’s Ryanair bus terminal).

The success of these events prompted the recently formed Automobile Club de France (ACF) to hold city-to-city races on an annual basis. 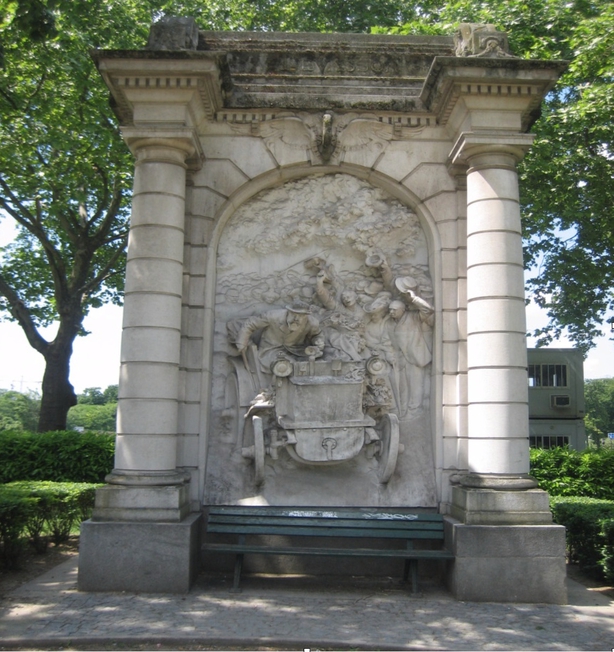 The largest sporting event in 1903 was not, as most would assume, the inaugural Tour de France bicycle race, but the Paris-Madrid road race organised by the ACF, whose departure from Versailles on 24 May 1903 attracted a reputed 200,000 spectators and a further two million people lined the roads from Paris to Bordeaux.

A spate of fatal accidents, however, brought about the cancellation of the Bordeaux-Madrid stage of the race. Among the victims was Marcel Renault, brother of Louis, and co-founder of the company still prominent in motor sport and automobile production today.

The ill-fated Paris-Madrid race signalled the banning of city-to-city races, as it was deemed impossible to adequately marshal motor races on open roads. The compromise insisted on by the authorities was a closed circle on public roads, the precursor to circuit motor racing as we know it today.

International motor racing began in 1900 when a wealthy American journalist named James Gordon Bennett Jr. decided to sponsor the Gordon Bennett trophy. This annual event was open to a maximum of three entries per nation, which were to be painted in an identifying colour irrespective of their manufacturer: blue for France, red for the United States, yellow for Belgium and white for Germany.

As there was no British entry in the inaugural race and since the three colours of the Union Jack were already taken, the Napier driven by Selwyn Edge in 1901, and which won the following year, was green. This is reputedly the origin of British Racing Green.

Although the competition was initially French-dominated, success by other nations revealed its potential to manufacturers and the public. The first British victory in 1902 brought with it responsibility for hosting the 1903 race.

Legal constraints in Great Britain led the organisers to look to Ireland where a relaxation of speed limits was permitted on rural roads, but not in towns. The racetrack consisted of a figure ‘8’ centred on Athy, Co. Kildare. At seven points where the track passed through towns, there were non-racing zones where the cars followed a bicycle through the streets.

This first international motor race outside France attracted global attention, and also inspired the story ‘After the Race’ in James Joyce’s Dubliners (1914).

Camille Jenatzy, driving a Mercedes, won the race, taking the Gordon Bennett Trophy – and the next year’s race – to Germany. The final Gordon Bennett race saw the competition return to France in 1905.

While the Gordon Bennett Cup races (1900-1905) had been a success in the internationalisation of motor sport, these competitions had left France increasingly frustrated. While other nations had to struggle to assemble a team, France had to hold separate qualifiers to choose its representatives.

Thus, with only three French cars out of twenty-nine qualifying for the 1904 event, most manufacturers found themselves without a chance to prove themselves on the international stage.

The ACF decided to boycott the 1906 Gordon Bennett competition, announcing that a new Grand Prix would be held, allowing three entries from each automobile manufacturer and which was held on a triangular circuit joining the towns of Le Mans, Saint-Calais and La Ferté-Bernard.

Twenty-three French cars took part in the competition, which, despite a significant attendance, made a loss. This was because most of the spectators decided to watch the race from areas where it was free rather than paying for entry into the main stand.

This setback notwithstanding, the entire weekend was deemed a success by the ACF, and Le Mans went down in history as having hosted the first automobile Grand Prix.