How a Galway weather station keeps track of climate change

Analysis: long-term measurements of pollutants is important because they allow us to see the impact of climate policies

By Clare Noone and Damien Martin, NUI Galway

Mace Head Atmospheric Research Station is located on the rugged west coast of Ireland. The research from the station is used in EU policy making and contributes to Intergovernmental Panel on Climate Change (IPCC) reports. The remote location overlooking the clean Atlantic Ocean monitors global northern hemispheric background levels of pollutants and effectively measures how dirty the cleanest air in Europe is. The station also monitors northern hemispheric background levels, European outflow events and in some case intercontinental transport events.

The original stations (Mace Head, Trinidad Head, Ragged Point, Cape Matalula and Cape Grim) occupy coastal sites around the world chosen to provide accurate measurements of trace gases whose lifetimes are long compared to global atmospheric circulation times. Two stations in Europe (Zeppelin, Jungfraujoch) and two in East Asia (Shangdianzi and Gosan) have joined the AGAGE network in recent years by using the same instrument and calibration scales. AGAGE also collaborates with stations at Hateruma operated by the Japanese National Institute for Environmental Studies and Monte Cimone managed by the University of Urbino in Italy.

Long term measurements of pollutants are important because they allow us to look at the impact of climate policies. For example, we have been able to effectively monitor intervention such as the 1987 Montreal Protocol, which saw the banning of ozone depleting substances, known as CFCs. We can see clearly how CFCs kept on rising until the effect of the protocol came into effect, resulting in their eventual decline. This was a huge win for climate scientists and the ozone hole has nearly fully recovered.

How the number of CFCs in the atmosphere have been reduced

The story unfortunately is not as promising for other greenhouse gases, like carbon dioxide (CO₂). Concentrations of atmospheric carbon dioxide (CO2) have increased from ~277 ppm at the beginning of the industrial era (~1750), to a global monthly average concentration of over 409 ppm. This increase has been attributed to anthropogenic activities, in 2015, the majority of global emissions were due to fossil fuel combustion: coal (41%), oil (34%), gas (19%), and cement production (6%).

The IPCC has stated that "warming of the climate system is unequivocal" and that the "human influence is clear", with the 2015 Paris Agreement establishing a global policy response to climate change. A key objective of the Paris agreement is that global GHG emissions are balanced with removals during the second half of this century. In Ireland, the national policy position is to reduce emissions of CO2 by 80% relative to 1990 emissions and to achieve neutrality for the agriculture and land use sector by 2050. Achievement of both will require strong policies as well as an increased understanding of emissions and removals.

Like in the case of the CFCs, CO₂, intervention is needed if we are to limit the effects of climate change. We can see that CO₂ levels have continued to rise over the past 20 years due to continuous fossil fuel consumption. From our measurements at Mace Head, we have seen insufficient policy intervention in terms of CO₂ and the levels have continued to rise year on year since measurements began in Ireland. 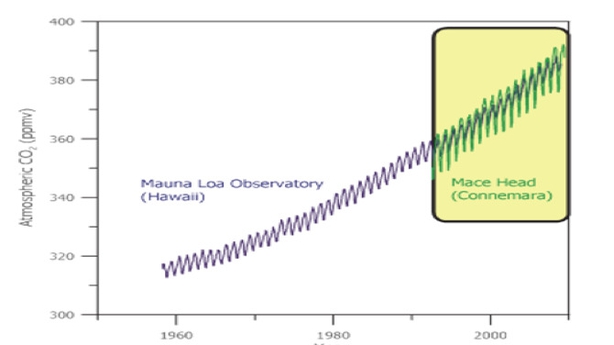 Unfortunately, that's not the whole story. In truth, the amount of greenhouse gas in our atmosphere is higher still if we factor in other greenhouse gases besides CO₂. Atmospheric scientists use CO₂-equivalent as a way to aggregate the effect of all these long-lived powerful greenhouse gases.

Although CO₂ is the most abundant greenhouse gas, other gases like methane (CH₄) and nitrous oxide (N₂O) influence how much the planet is warming, many of them are more powerful greenhouse gases than CO₂, and some linger for longer in the atmosphere. For example, methane is one of the most potent greenhouse gases in the earth's atmosphere and is 32 times more efficient at trapping heat than CO₂, on a per-molecule basis over a 100-year time span.

So, if we look at "CO₂-equivalent", or CO₂-e, then the world has already surpassed a worrying milestone. In July 2018, the "cleanest air in the world" at Cape Grim Baseline Atmospheric Pollution Station (Tasmania) surpassed 500ppm CO₂-e. To put this figure into perspective, the Paris climate agreement is aimed at limiting global warming to less than 2℃ above pre-industrial levels, to avoid the most dangerous effects of climate change. The best estimate of long-term global warming expected from 500ppm CO₂-e is about 2.5℃. The fact that the cleanest air in the world has surpassed 500ppm CO₂-e should be ringing alarm bells