How should Ireland remember Soloheadbeg?

"What Soloheadbeg represented was the latest stage in an ever-growing tension between a militant minority and their more moderate nationalist counterparts over Ireland's future direction". Image courtesy of RTE.

Opinion: Soloheadbeg’s importance lies not so much in its immediate results, but more in how those events have been remembered

From the very beginning, the meanings of the events of 21 January 1919 in Soloheadbeg, Co. Tipperary have been contested. On the same day as the meeting of the first Dáil, Séamus Robinson, Dan Breen and Seán Treacy led a group of volunteers in killing James McDonnell and Patrick O’Connell, two members of the Royal Irish Constabulary, while carrying out an ambush to capture gelignite. Generally considered as the starting point of the War of Independence in Ireland, the ambush certainly marked a new phase in what became known as the Irish Revolution.

What Soloheadbeg represented was the latest stage in an ever-growing tension between a militant minority and their more moderate nationalist counterparts over Ireland’s future direction. Since before 1916 and the Easter Rising, there had been volunteers such as Robinson, Breen and Treacy who had demanded a more violent approach, including the targeting of policemen. These volunteers, who became part of the Sinn Féin movement during 1917 and 1918, were with a public radicalised further by the death after being force-fed of Thomas Ashe and the threatened introduction by the authorities of conscription during the First World War.

What the military and political wings of Sinn Féin shared was a commitment to an Irish republic. How to achieve this or what exactly it was were questions that remained unanswered. When the 1918 general election was won by Sinn Féin, and with the Dáil due to meet in early 1919, the more militant wing, as reflected by An t-Óglách (the Irish Volunteer) journal, became increasingly fearful that they would be eclipsed by politicians. Soloheadbeg, at least in the eyes of Robinson, Breen and Treacy, was the logical next step and a natural intensification of the intimidation and clashes that had long been a feature of relations between nationalists and crown forces. 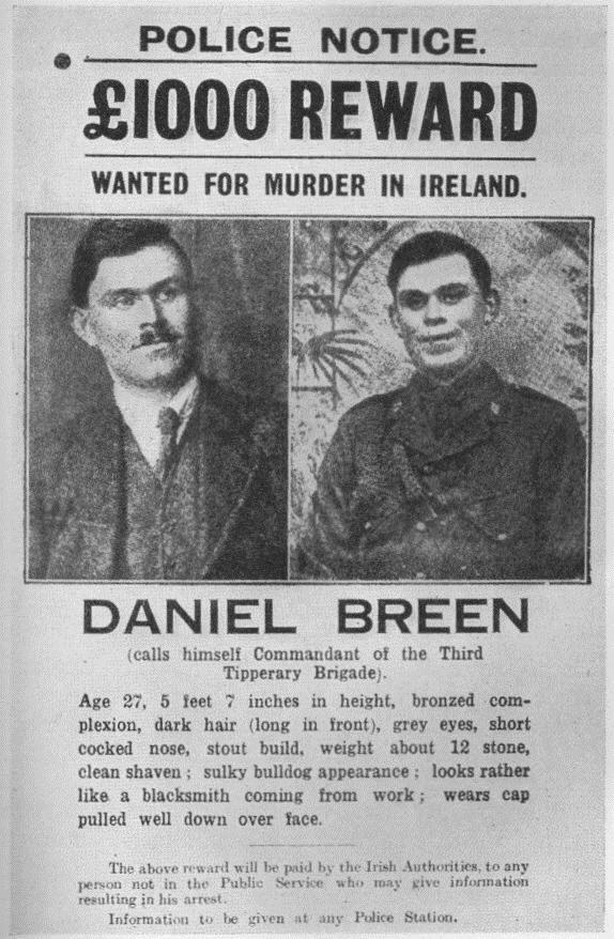 It was critical that it should take place before or at the same time as the Dáil met as the need to take action had become paramount. According to the witness statements of Robinson and Breen in the Bureau of Military History, the shooting of the two policemen was deliberate. As recounted by Richard Abbot in his book, Police Casualties in Ireland, 1919-1922, and by such historians as Paul Bew, Michael Hopkinson, Michael Laffan and Charles Townshend, McDonnell and O’Connell were decent individuals (McDonnell was an Irish speaker and a widower with five children).

Their deaths prompted considerable unfavourable reaction, unsurprisingly from Unionists and moderate nationalists, but even from members of Sinn Féin. As had been the practice in the past, the national leaders of the IRA, as the Volunteers became known, initially believed that Robinson and the others should leave for the United States. When Robison refused, insisting that they should fight (they spent the next months on the run), Michael Collins, the adjutant general of the IRA among other positions, said that that was alright with him. While Chief of Staff Richard Mulcahy viewed Soloheadbeg as tantamount to murder, Collins seemed to approve of an escalation of clashes with the RIC.

What Soloheadbeg revealed more than anything else was the divisions within the Republican movement. These would not be so much between Collins and Mulcahy (the latter greatly admired Collins) as between Collins and Cathal Brugha and Austin Stack, the Ministers of Defence and Home Affairs in the Dáil government. They were suspicions of the secret Irish Republican Brotherhood and Collins' role in defence matters and, unlike Collins, insisted that the Dáil should have authority over the IRA.

What Brugha and others had not fully come to terms with was that no-one - not even Collins - had control over the actions of local IRA leaders such as Robinson. The latter’s decision not to seek authorisation for the Soloheadbeg attack from General Headquarters was partly due to his concern as to whether he would have received a response in time. More than that, there was a fear that the plan might not have been approved. Throughout much of 1919, headquarters was cautious that an increase in the number and scale of operations was not possible as there was an insufficient number of weapons and the volunteers did not have the training needed for such a campaign.

Early in 1919, the initiative in Ireland was taken by local IRA commanders. This was at least in part to maintain the morale of volunteers who, given the lack of action since 1916, were in danger of drifting away from the IRA. The majority of the attacks that did take place during the first half of 1919 were on Catholic Irish policemen, many of whom were respected members of their community. But as the months passed, the number of deaths of policemen increased and these received less sympathy, partly because of a heightened British military response. The RIC was increasingly placed in a difficult position.

Drawn in many cases from the same class and background as those who supported Sinn Féin, the motives and actions of members of the RIC were more complex than those of a colonial police force. Much later, some joined the Royal Ulster Constabulary in Northern Ireland (more likely the Protestant members) or the Gardaí Síochána in the Irish Free State (Catholic members).

From RTÉ Radio 1's History Show, historian Edward Madigan on ex-servicemen who fought on both sides in the War of Independence

During the War of Independence, many policemen resigned or took early retirement from the RIC. Others tried to assuage the worse effects of British policy, particularly following the arrival of the Black and Tans and Auxiliary forces in Ireland in 1920. Others still switched loyalties and co-operated with the Republican side. But if Ireland was to be made ungovernable as the IRA intended, those that remained loyal RIC policemen were the first in the line of fire, particularly as they symbolised Imperial power and were a source of arms for the Republican movement.

Solheadbeg was not only the first attack to result in the deaths of RIC personnel, but the operation also captured explosives which could be then used by the IRA. What gave Soloheadbeg an increased importance was that it took place on the same day as the first sitting of the Dáil. These events reflected the ongoing attempt to make British governance in Ireland unworkable and to place an Irish government and army in its place.

In the short term, this met with at best incomplete success. Throughout 1919, early 1920 and with the establishment of IRA flying columns in the later half of 1920, local leaders and conditions remained critical in the increasingly bloody phases of the conflict. Regional leadership retained an ongoing importance in the latter stages of the War of Independence in 1921. They also played an importantrole when it came to choosing a side in the subsequent divisions over the Anglo-Irish Treaty, a settlement which proved to be unsatisfactory to Robinson and Breen (Treacy had been killed in 1920).

From RTÉ Six One News, a report on the Atlas of the Irish Revolution which details the impact of the Rising, the War of Independence and the Civil War across the country

In many ways, the bitter split in the civil war between the pro and anti-treaty forces originated in the differences between the more militant and political wings of the Republican movement which had done so much to instigate the actions in Soloheadbeg in 1919. These issues were not finally resolved until Ireland declared itself to be a republic in 1949, thus removing the final link with the British crown.

In the longer term, Soloheadbeg’s importance lay not so much in its immediate results, but more in how it has been remembered. Having initially been criticised, the events in Soloheadbeg inspired a ballad and Breen’s memoir My Fight for Irish Freedom, which greatly added to the author’s fame. In 1950, President Seán T. O’Kelly unveiled a memorial with the names of the IRA volunteers.