I fought the law: how 1980s' Irish theatre took on the gardai

"Plays written by Frank McGuinness, Aidan Mathews and Tom Murphy demonstrate real concern over such erosion of civil rights and the potential for abuse of these laws by the gardaí". Image courtesy RTE Brainstorm

Opinion: Irish theatre responded to serious problems within the police force in the 1970s and 1980s with surprising fury

As a nation, we have been forced to acknowledge that there are serious problems within the police force in Ireland. Most recently, we had the Maurice McCabe story, revealed in the Charleton Tribunal, which pointed to corruption and lack of accountability at the highest levels of authority in An Garda Síochána.

This phenomenon is not a recent one. For instance, the 1970s and 1980s saw miscarriages of justice such as the Sallins train robbery convictions and the infamous Kerry Babies Tribunal. This period also saw extra powers granted to the gardaí in response to the threat of paramilitary gangs north and south. Following on from the 1971 broadcasting ban, the re-introduction of the jury-less Special Criminal Court (1972) and the Emergency Powers Bill (1976), the contentious 1984 Criminal Justice Act gave increased powers to the gardaí for stop, search and arrest.

From RTÉ Archives, Brian Farrell interviews Conor Cruise O'Brien in 1973 for Seven Days about Section 31 of the Broadcasting Act

In response, Irish theatre in the Republic, which had been silent in the main regarding the Troubles, reacted with surprising fury. Plays written by Frank McGuinness, Aidan Mathews and Tom Murphy demonstrate real concern over such erosion of civil rights and the potential for abuse of these laws by the gardaí.

Frank McGuinness’s Borderlands (1984) was written for young adults under the TEAM initiative and it played in schools all around Ireland. In the play, four youths - two Protestant and two Catholic - set off on a sponsored charity walk from Northern Ireland to Dublin. When the boys reach the Republic they encounter antagonism in the person of Vonnie, a landowner on whose land they attempt to camp. Vonnie calls the local guard to help evict them who berates the boys when he arrives: "This country’s civilised. No packs of savages blowing the brains out of each other". Ultimately Vonnie regrets calling him, telling him "we still have ones over you in this country".

From RTÉ Archives, Maria Keating reports for Ireland's Eye in 1983 on the TEAM initiative to bring theatre to schools

This is a strong anti-establishment message to give school children. In his introduction, the director of TEAM, Martin Drury notes that the guard is "frighteningly real...in the way he gives expression to the institutional violence and the perversion of language embodied in the Criminal Justice Bill". The bill was debated in the Dáil during the play’s tour.

Aidan Mathews’ The Antigone, loosely based on Sophocles’ Antigone, played in the Project Arts Centre in 1984. The play opens with the Chorus, played singularly by Mannix Flynn, putting posters featuring Orwellian messages onto the wall of the stage. Haemon, Creon’s son, is now Chief of the Secret Police. The trappings of an autocratic state apparatus are obvious from the start of the play; Creon and Haemon implement their rule by whatever means necessary. One step down the power structure, Chorus is obsequious towards Creon and Haemon but displays violent and sexist behaviour towards the female characters. The end of act one is signalled by an increasingly audible reading of the Criminal Justice Bill, here again the focus of protest.

The audience are deliberately targeted throughout the performance: they witness a cover-up as a critic of the state is murdered and Antigone warns them that they are next. She is attacked by Chorus and the ensuing struggle is staged as if Antigone is choking for real. The play ends with the cast turning on the audience, telling them to disperse quietly, calling them voyeurs and peeping toms, and finally Creon orders them to go home as they can do nothing. Mathews stages the nightmare scenario of life in a totalitarian police state as lurid reality.

Tom Murphy staged his own unease with police corruption in his play The Blue Macushla at the Abbey Theatre in 1980. In his introduction to Plays: One, Murphy writes of a series of frightening incidents which occurred after his return to Ireland in 1970 when he became aware of the exceptional powers of the Garda Special Branch Division, set up to deal covertly with terrorist activity. 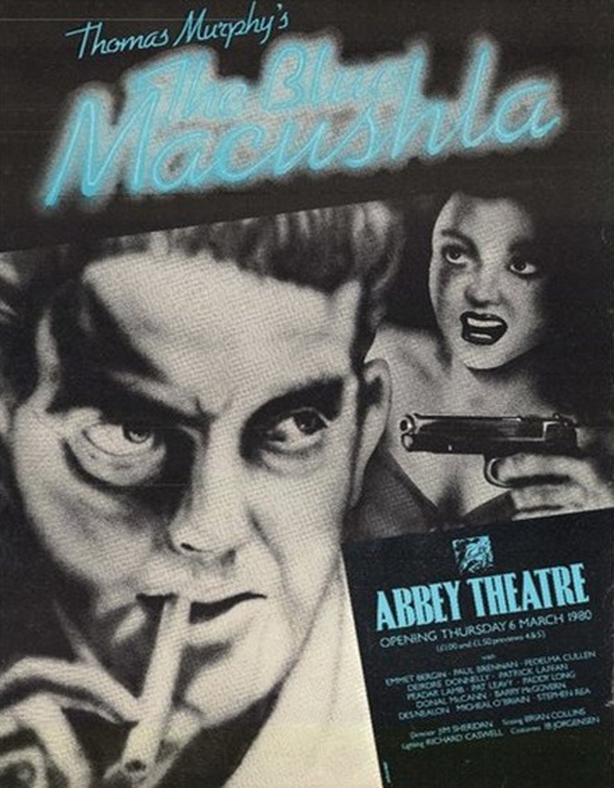 Poster for The Blue Macushla at the Abbey Theatre in 1980

A film-noir tale set in a sinister nightclub which fronts all kinds of illegal activity, the play tells the story of a common thief who is blackmailed into allowing his premises to be used by Erin Go Bráth, a paramilitary organisation obviously suggesting the IRA. The mood is satirical, the onstage world a parody of a state gone rogue. The climax sees the passing of the "holy grail" (a black book which contains the names of those implicated in crime) from the gang of criminals into the hands of the equally corrupt cops. The "book" does not stop there and it is implied that it contains names from the highest offices in the land.

A sense of great unease about potential and actual abuse of power by the state and her arms is evident in these plays and others of the period. Theatre can react with immediacy to societal issues and concerns, but the themes staged in these plays were controversial at the time.

There was a widespread reluctance to question any emergency laws or the granting of exceptional powers to the gardaí for fear of being associated with paramilitary propaganda. The legacy of this lack of accountability brought to bear on the forces of the state lingers on. It accounts for the arrogant attitude to internal policing that is evident in An Garda Síochána today. The playwrights, it is clear, were right to be concerned.