Analysis: babies are wired to acquire more than one language and tend to do so without too much bother

More than half of the world's population speaks two or more languages and Ireland has three official languages (Irish, English, and Irish Sign Language). The 2016 census revealed that there are about 180 languages spoken in Ireland now.

Despite all this, there’s still a tendency to think that learning more than one language is hard or confusing for babies and young children. It really isn’t - and it turns out that babies are wired to acquire more than one language and, given the right support, generally tend to do so without too much bother.

There are different definitions of what it means to be bilingual. It doesn’t have to mean total fluency in listening, speaking, reading, and writing. Basically, if you need two or more languages to fully participate in all aspects of your life, then you’re bilingual.

Babies start to hear while they’re on the inside at about 26 weeks of the pregnancy. While they’re still in there, they start to separate languages. What they're hearing is a bit muffled because it’s being filtered through skin, muscle and amniotic fluid, but they’re hearing enough to work out the different patterns of the languages. Things like rhythm and intonation, the ups and downs of different languages, the patterns associated with questions versus statements.

Newly born babies in the early days after birth show preferences for the languages they’ve heard while they were on the inside over languages they hadn’t heard before. This ability is robust at birth. New babies prefer to listen to stories that were read to them before they were born over stories heard only after birth. Babies show preferences for speech over non-speech sounds like footsteps or doorbells showing that they’re wired to acquire languages from the get go. Not just one language, but more than one language.

We’re all born with the ability to hear the differences between all of the sounds of all of the world’s languages. When we’re born, we also have the ability to produce all of those sounds too (that’s about 600 consonants and 200 vowels). 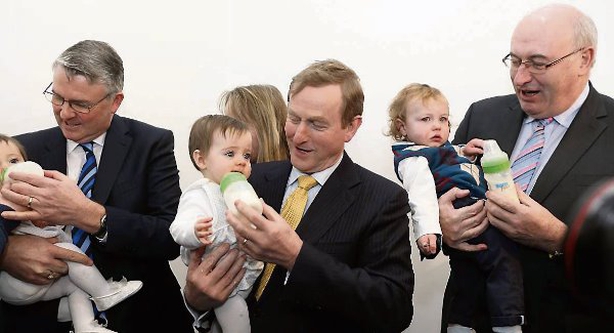 It’s a kind of a use-it-or-lose-it thing though: from about 6 months of age, babies gradually narrow their focus to the languages that they’re hearing around them. Don’t panic, this doesn’t mean you have to introduce a second language early if you want your child to be bilingual. There isn’t a time limit on this.

If you speak languages other than English at home, like Irish or Polish or French, it’s best to focus on these as much as possible. English is everywhere and not in any danger of being lost or not well-developed. But home languages need intensive support because they're in danger of loss or incomplete development, especially when your child begins to develop friendships with English-speaking children and going to pre-school and school in English.

A baby’s job is to recognise the different patterns in the two (or more) languages. This means things like working out what sounds are unique to each language and which sounds are common. Figuring out that there’s "sh" in both Irish (scéal) and English (shoe), but there's only the sound in the middle of buachaill in Irish. They also have to work out what sounds are allowed to go together in the different languages: you can have "mn" together as in mná in Irish, but English doesn’t allow that.

From about 9 months, babies show a preference for these kinds of sound combinations that are allowed in their languages. That means, they’re working out the rules of each of their languages, all on their own. Canadian research shows that bilingual babies who are learning English and French can tell an English /d/ from a French one at 10 months of age! This is all going on before they even say their first word.

When babies start to babble (between 7 and 10 months of age), they tend to produce similar sounds no matter what languages they’re being exposed to or where in the world they are. By about 10 months, their babble starts to sound like the languages they’re hearing around them so their babble will sound different depending on their different languages. Speaking two or more languages doesn’t slow down speech and language development and it doesn’t cause any speech or language problems.

First words tend to emerge between 8 and 15 months of age. Bilingual toddlers also tend to work out very early on who can speak which language and will match their language to the person they are speaking with. More Canadian research with bilingual children aged 22 to 26 months of age confirms this. The researchers found that the children tended to use more French with the French-speaking parent and more English with the English-speaking parent. When they met people they were unfamiliar with, most of the babies were able to match the language they used to the language of the adult.

While babies are wired to acquire two or more languages, they can’t do it all on their own. Talking with your baby a lot in your languages gives them the opportunities they need to work out the patterns of the languages. It’s like their brain is scanning all the speech that they’re hearing and working out the rules of the languages.

It’s not just about what they’re hearing either. They’re also paying close attention to your face while you’re talking with them and their brains are integrating what they’re hearing and what they’re seeing. Reading and singing together are two natural and fun ways to build your baby’s languages from early on - even from before they’re born if you like.