NUI Galway on RTÉ Brainstorm: The maths of public transport in Galway

Opinion: here's what geometry has to say about where to build the most efficient tram and light rail lines in Irish cities

One of the solutions to climate change is to have fewer people driving cars, and one way to do that is to provide an efficient public transport system. In Irish cities, this is done by Dublin Bus, LUAS, DART and smaller city services in Cork, Limerick and Galway.

But is this public transport system efficient? Is it effective? "No" I hear commuters cry. So how do we make it better? Higher speed, more stops (these last two may be contradictory aims to many), more frequency, more coverage, cheaper,....the list goes on.

However, what if some cities lend themselves to a more efficient and better designed public tram network because of their shape? This is where mathematics - geometry to be exact - has something to say. Cities have unique shapes, often because of natural features such as the sea, mountains or a lake. While most cities are probably in some sense circular, many are not. You may live in a city that resembles more a square, or a triangle. Then, there's rectangles, pentagons, parallelograms, hexagons, trapezoids... If you look at the shape of Dublin, it looks like a pizza with a substantial slice taken out of it for Dublin Bay. By contrast, Galway looks like a long rectangle.

If you build such a line in Galway, one line running through the centre of the rectangular city can extend 8km (or maybe further if you include Oranmore and Bearna) before reaching "countryside". Here, there are some obvious advantages because of the shape. More people will live closer to such a line in a rectangular city, and travelling on a single line to get from A to B increases efficiency, as opposed to having to change trams once or twice, with associated delays. 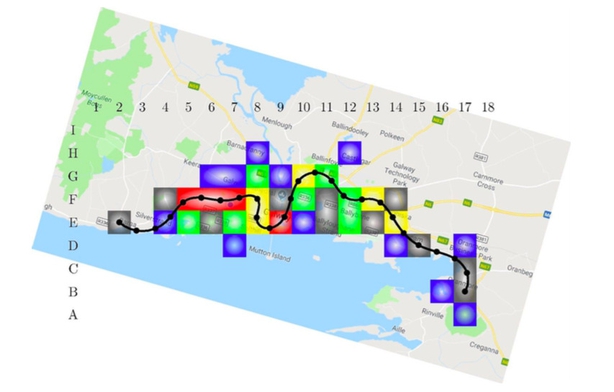 A single tram line fits the rectangular shape of Galway city with one or two small twists and turns and serves about 48,000 people living within 0.5km of the line. Red corresponds to the highest population area, then yellow, green, grey and blue, which has the lowest population.

In cities of equal size in terms of population and size, it's easier to build an efficient tram network where there is a longer perimeter, whether that be a squashed parallelogram or triangle, or a narrow rectangle or elipse. On the other hand, it's hardest to build an efficient system in a circular city, which has a minimum perimeter for its area.