NUI Galway on RTÉ Brainstorm: What did the "lord of blood-vengeance" do in medieval Ireland?

Analysis: when it came to getting retribution for grievances, the aire échta was the man to call

The themes of medieval vengeance and reprisal are increasing familiar to the public eye in the cinematic age of Vikings, The Last Kingdom and Game of Thrones. Nevertheless, what might raise more eyebrows is the existence of a grade of lord in medieval Irish society whose legally charged task was to obtain redress for an grievance caused by one kindred upon another. Such redress could go as far as forcible seizure or vengeance.

This person was called the aire échta, the "lord of blood-vengeance". A closer look at various early medieval Irish texts indicate that the aire échta appears to have been more influential before a period of recurrent interterritorial legislation (that is, laws between kingdoms), beginning in the eighth century. Some evidence has emerged that may show how the position of the aire échta became eroded by ecclesiastical disfavour, the increasing influence of elite clergymen in interterritorial dispute settlement and increasing legal administration by overkings in the hierarchy of medieval Irish kingdoms.

So how did the "lord of blood-vengeance" operate? Críth Gablach, the 8th-century law-text on the status of various kinds of people in society, includes a difficult Old Irish passage on the aire échta, expertly translated by legal scholar Neil McLeod: "the aire échta, why is he so called? Because he is the leader of five which is excluded from committing slaughter under a cairde ["treaty"] until the end of a month, to avenge the dishonouring of a kingdom from which a person has recently been slain. Provided they do not do so before the end of the month, they go [to obtain redress] in the treaty-kingdom and their protection does not lie with him there."

Disputes occurring between two kingdoms which had a cairde "treaty" (or more precisely, "a legal protocol for handling disputes between kingdoms") normally would be settled by means of "sureties", or legal representatives acting on behalf of the victim’s and offender’s kindreds. They would ensure that compensation was paid across a kingdom’s border for an offence. However, when this system did not work as intended, and the offender and his kindred did not offer to pay compensation for a murder committed across a territorial border within a month’s time, the aire échta could gather five people from the victim’s close kindred (brothers, father, uncles, or cousins) and cross into the offender’s kingdom to avenge this murder.

However, could this commando-style operation exacerbate tensions between kingdoms or fuel dynastic feuds? And how did early Irish ecclesiastical communities perceive the aire échta? Some answers to these questions lie in the eighth-century law-text Bretha Crólige, "Judgements on Blood-lyings" and the legal narrative "The Expulsion of the Déisi". One passage in Bretha Crólige reads: "there are three persons in the territory who are maintained according to the [standard of] maintenance of a bóaire - neither their dignity nor their sacred character nor their rights nor their tonsure make any increase in [the standard of] their sick-maintenance —a druid, a reaver, a satirist. For it is more fitting in the sight of God to repudiate them than to protect them." 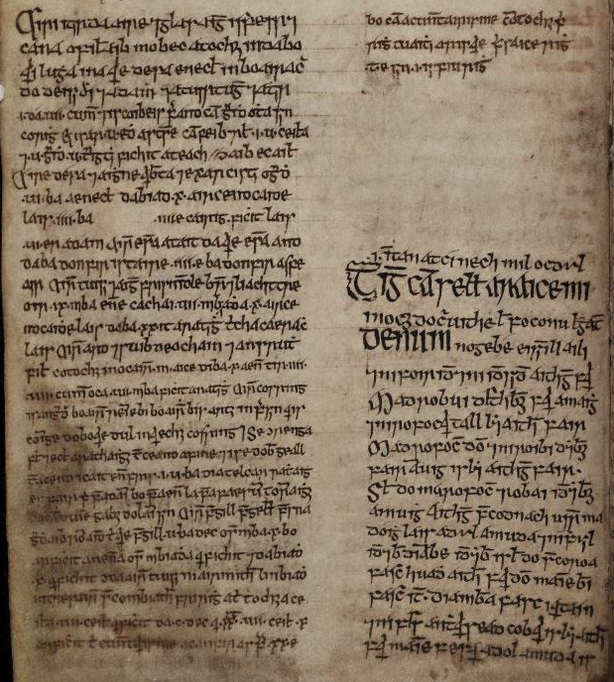 The author of an eighth-century legal narrative "The Expulsion of the Déisi", appended to the beginning of a law-text on accidents Bretha Éitgid, illustrates the potential disorder that could result from the violent actions of an aire échta. While Óengus Gaíbuaibthech ("Óengus of the Dread Spear"), the aire échta of the tale, is off in Connacht to avenge an affronted kindred, his niece is abducted by the king of Tara’s son, Cellach back in the overkingdom of Brega. Óengus swiftly returns to Brega with his vengeful task unfulfilled, to take vengeance for this more local dispute. With his blundering, tactless actions, he kills Cellach and in the process accidentally blinds the king of Tara Cormac mac Airt, and kills his legal officer. The author illustrates the potential volatility of the aire échta’s office: when things get out of hand, the result may be exacerbated tensions and a fragmented socio-legal framework within an overkingdom.

So was there a better way to handle interterritorial disputes when dynastic politics and elite members of society were directly involved? At the end of the seventh century, an innovative kind of interterritorial legislation emerged that flourished for over a century: the ecclesiastical cánai. These were edicts enacted by the most powerful kings and ecclesiastics throughout Ireland, along with their subordinates, and were designed to function between kingdoms, and sometimes even between entire provinces.

The first of these edicts, Cáin Adomnáin, proscribes a far more expedited timeline for payment for offences than usual. This would make it even less likely that a month would pass with an offence going unresolved, after which the duties of the aire échta would be required. It may well be that these edicts were partly intended as church-mediated legislation to deal with interterritorial issues even when contentious dynastic politics came into play.

So was there a better way to handle interterritorial disputes when dynastic politics and elite members of society were directly involved?

By the time of the early 10th century, we see a law-text involving the distribution of cró, "compensation for murder", and díbad "inheritance", which describes an overking arbitrating disputes involving homicide between two subordinate kingdoms under his rule. In many regions, methods of interterritorial dispute settlement seem to have moved largely beyond the aire échta by this time, which may explain his later demoted status mentioned above. However, legal discourse on the aire échta does continue even to the Early Modern Irish period (c.1200-1600AD), but whether this suggests the continued existence of the office or simply the prolonged interest of early modern legal scholars is less certain.