NUI Galway on RTÉ Brainstorm: What does your local council do with your money?

Analysis: Leitrim spends €392 per person on roads, Galway spends €86 per head on housing and Meath spends €44 per citizen on recreation and amenities

With the local elections taking place next week, it's a good time to consider the role of local councils and especially their economic function as a provider of local services funded by taxpayers’ money. In terms of both spending and income and, in particular, commercial rates,  here are some big differences between local authorities. These can be accounted for by variations in expenditure needs arising from differences in the physical, socio-economic and demographic profile of the area and its population

The Local Authority Finances website allows taxpayers to see how their money is spent locally. Aiming to improve transparency and accountability by informing the public on how taxpayers’ money is spent locally, it can be used to access and understand individual council income and spending budgets. It can also provide cross-council comparisons, with a view to identifying differences in local authority spending and income, as well as star performers and council laggards.

From RTÉ Radio 1's Drivetime, why BusConnects is a key local election issue in Dublin

Of the eight functional areas that local councils provide, four service divisions account for 75% of total current spending. These are housing (€351 per person nationwide in 2019), roads (€208), environmental services (€152) and recreation & amenities (€102).

But across the 31 local authorities, there are sizeable differences in terms of how much councils spend per person. The highest and lowest spend per head occur with Dublin City Council and Meath County Council, at €1,751 and €635 per inhabitant respectively.

On recreation and amenities, including libraries, the arts and leisure (parks, playgrounds, sports and leisure facilities) spending per capita ranges from €223 in Galway City Council to €44 in Meath County Council.

From RTÉ Radio 1's Today With Sean O'Rourke, Gary Murphy from DCU and Kevin Doyle from The Irish Independent on local election issues

As for spending changes over time, the more urban, eastern local authorities have witnessed the largest increases in day-to-day spending since the last local elections, with the more rural local authorities experiencing the smallest increases and even some recording reductions in day-to-day spending since 2014. In contrast, all local authorities experienced reductions in current (and even more so in capital) spending between the local elections of 2009 and 2014, coinciding with the years of austerity. Even with the recovery in the general economy since the last local elections, the issue of the rural/urban divide remains a serious challenge for our policymakers, both local and national.

This difference between rural and urban councils is countrywide, with the more urban densely populated councils able to rely more on own-source incomes such as commercial rates, retained local property tax (LPT) and user charges, resulting in a greater degree of fiscal autonomy for these councils, while the rural less populated county councils have to depend more on central government grants to provide local public services.

Commercial rates account for about 30% of total revenue income, as against the local property tax which accounts for only 8%

As most tax revenue (as distinct from service charges and central government grants) for local councils is in the form of commercial rates and not LPT, we report the commercial rate called the Annual Rate on Valuation (ARV), for 2019. In Ireland, income from these business taxes is used as a balancing item to equalise budgeted expenditures with budgeted income from all other revenue sources, to ensure the local balanced budget rule is met. What is interesting is the cross-council variation in the ARV, as is evident in the table.

As a tax on business property, commercial rates account for about 30% of total revenue income, as against the LPT which accounts for only 8% of revenue income. Given the Government’s recent and regrettable decision to, yet again defer the revaluation of residential properties for LPT purposes, this imbalance between business and non-business taxes to fund local public services is an issue that requires more analysis and discussion. Indeed, the local elections provide an ideal opportunity for voters and policymakers to debate this and other local concerns. 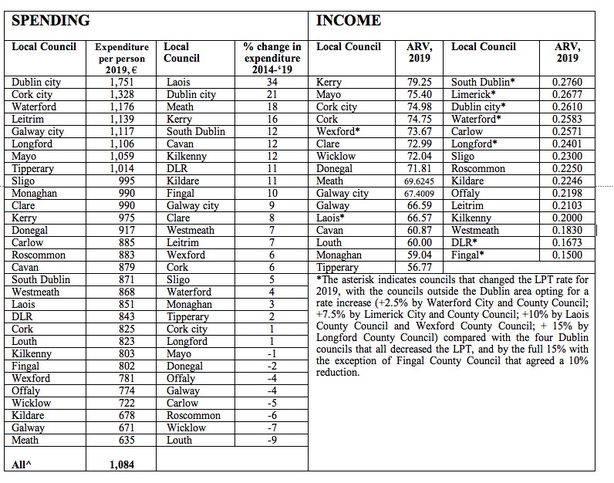 Data take from www.localauthorityfinances.com and the Department of Housing, Planning and Local Government www.housing.gov.ie
^Expenditure data for Limerick City and County Council are not included as its annual budget is inflated by the spending on the Housing Assistance Payment (HAP) scheme with Limerick City and County Council running the shared services centre on behalf of the 31 local authorities. Similarly, Dublin City Council is the lead local authority in the Dublin region for homeless services (operating a shared service arrangement via the Dublin Region Homeless Executive), and for the fire service. This is important when comparing expenditure data across the four Dublin councils.

Given the variations in the profile, circumstances and choices of the different areas and their constituents, these cross-council differences in budget income and spending are not unexpected. The argument in favour of decentralisation and having local councils, after all, is to bring government closer to the people so that citizens get what they want given their differences in preferences and willingness to pay, rather than the uniformity than comes with central government provision.

In the run-up to these local elections we urge voters to use the website to get a breakdown of their local council income and spending and how it compares to other councils and the national average. By doing so, they can see how taxpayers’ money is spent locally.