NUI Galway on RTÉ Brainstorm: Why do some Irish estuaries turn green every summer?

One of the main human pressures affecting European coastal ecosystems is nutrient over-enrichment as a consequence of human activities. Reduction in nutrient loading is considered the main remediation action. Nutrient over-enrichment became an important issue in Europe after industrialisation and the increased use of commercially available artificial fertilisers following the Second World War.

Estuarine environments are particularly susceptible to nutrient over-enrichment and other pollutants as a consequence of the smaller size of these water bodies, their relatively lower flushing rates and because they are the primary receptor of land based contaminants which enter through rivers. The development of opportunistic macroalgal blooms or seaweed tides which occur in many parts of the world are a clear indicator of nutrient enrichment in estuaries.

Macroalgal blooms do not pose a direct health risk, but the accumulation and subsequent degradation of large amounts of seaweed biomass over short periods of time produce negative consequences for the ecosystem and shore-based human activities. For instance, biomass degradation as a result of bacterial breakdown and decay in estuaries dominated by large seaweed tides can consume most of the oxygen in the water. They also release toxic compounds which in turn impact on fish, shellfish and other species and organisms crucial for ecosystem functioning and services. 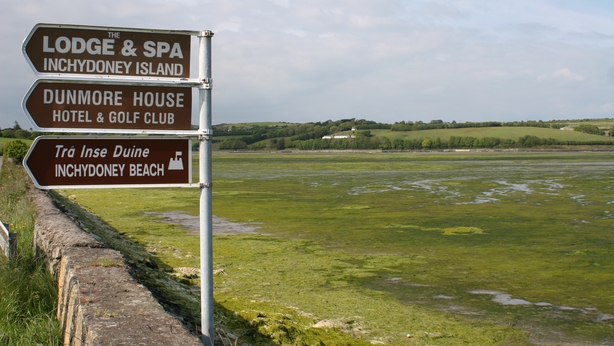 The green estuary in Clonakilty is not a tourist attraction

During the Beijing Olympics in 2008, 13,000 square-kilometres of seaweed biomass (over 1 million tonnes) had to be removed from the sailing venue in Qingdao Bay at a cost of €200 million. In Brittany, 14,560 m3 of Ulva seaweed was removed from the shoreline at a cost of €1.8 million in 1992. The cost of lost ecosystem services are likely much greater and difficult to accurately determine in monetary terms.

In Ireland, the largest macroalgal blooms occur in the Tolka (Dublin Bay), Argideen and Clonakilty (Co. Cork) estuaries. These estuaries fail to meet the criteria for "Good Ecological Status" as part of the process for assessment and monitoring of macroalgal blooms under our obligations for the EU Water Framework Directive. The percentage of the estuary affected by macroalgal tides and the biomass abundances recorded during peak bloom conditions are considerably higher than the regulatory requirements, suggesting potentially significant harmful effects on organisms and ecosystem.

Despite much effort to reduce nutrient loadings in the last few decades, such as the development of more efficient waste water treatment facilities, our research revealed an increase between two and three-fold in the biomass density of Ulva during peak bloom of the green tide affecting the Tolka Estuary between 1990 and 2016. But other indicators related to the monitoring of the environmental quality in this estuary (such as dissolved oxygen in the water) revealed a lower incidence of lower oxygen concentrations in the seawater and hence the improvement in water quality. 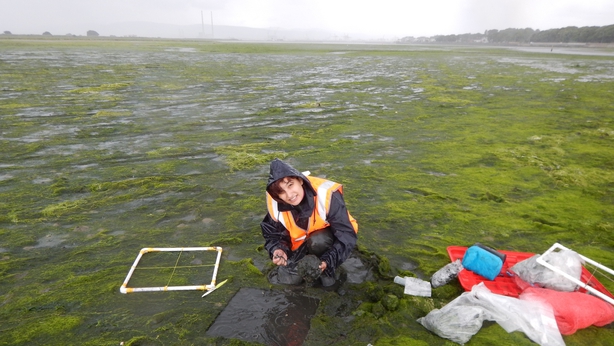 Gathering research data at the Tolka estuary in Dublin

The addition of nutrients to Irish estuaries arises from a combination of current loadings and potential reservoirs (e.g. nutrients stored in estuarine sediments and in groundwater which are slowly released to the marine environment), making it difficult to identify the importance of specific sources. Considering this, a reduction in current nutrient loadings may not result in an instantaneous reduction in the occurrence of opportunistic macroalgal blooms.

It is worth noting that recovery of natural ecosystems is often slower in terms of time period than the processes that actually lead to the degradation in the first instance. For example, a community shifts from seagrass meadows to macroalgal or microalgal tides in estuarine environments as a result of human-induced nutrient inputs has been reported to occur over relatively short periods of time, while the recovery of seagrass meadows is much slower. This can have important negative effects in the natural goods and services that estuaries provide, such as the provision of habitat for organisms and nutrient and carbon sequestration.

The release of nutrients from agricultural practices is already a significant source of surface water pollution, and is potentially predicted to increase with a greater demand for food associated with global population growth. Food Wise 2025, the Irish Government’s vision for the agri-food sector, includes agricultural intensification to satisfy domestic demand and increase exports, which may impact on water quality and greenhouse gas emission targets. It is likely that these issues will result in increased nutrient over-enrichment and hence increased incidence and severity of macroalgal blooms as predicted by EPA modelling approaches and direct observations elsewhere in the world.

Although nutrient enrichment is a necessary prerequisite for the development of macroalgal blooms, other factors such as temperature, salinity or the pool of opportunistic species capable of blooming control seaweed tide development and severity. During the course of the Environment Protection Agency (EPA)-funded Sea-MAT project at NUI Galway, we observed an increase in the area affected by macroalgal blooms in the Clonakilty Estuary using historical satellite images. This increase was not related to greater nutrient loading, but as a consequence of the arrival of an alien species from Japan (Agarophycum vermiculophyllum, previously known as Gracilaria vermiculophylla) as confirmed using molecular identification techniques.

The Sea-MAT project also discovered that green tides affecting Irish estuaries are multispecific (comprised of many species) and not monospecific (just one species) as previously thought. This could have important consequences for bloom persistence, nutrient enrichment and storage in sediments, and ultimately effective management strategies. Meanwhile, our EPA-funded MACROMAN project will attempt to predict the response of seaweed tides in Ireland in the context of global change in order to identify solutions aimed at preventing eutrophication and boost ecosystem recovery.