NUI Galway on RTE Brainstorm: Why it's more important than ever to protect the health of our oceans

Opinion: It's worth remembering that our oceans are a shared resource, and through much of our history, they had no-one advocating for their care. It is not a never-ending resource, and we can damage it from afar.

Twenty-seven years ago at the 1992 Earth Summit in Rio de Janeiro, Canadian delegates proposed an international day to celebrate the oceans, hence why the 8th of June is World Oceans Day.

The 1980s had seen increasing global awareness of environmental concerns. The 1987 Report of the World Commission on Environment and Development highlighted many issues, like how the oceans provide "the ultimate sink for the by-products of human activities" and how the growth of the world’s population and economy make demands for food, fuel and waste disposal that negatively impacts the ocean.

Ireland’s ocean is more than ten times the size of its land at around 880,000km2. The ocean economy provides jobs for more than 30,000 people in shipping, fisheries, leisure, tourism, oil & gas, engineering and conservation with an annual turnover of almost €6 billion. But it is not a never-ending resource, nor is it just Ireland’s resource, and we can damage it from afar.

We need healthy oceans as they produce more than half the world’s oxygen (through photosynthesis of algae large and small), they sequester carbon (i.e., withdraw carbon from circulation), provide us with food, regulate our climate, and provide a wealth of genetic resources.

The potential value of anti-cancer drugs from marine organisms may be more than a trillion US dollars so our biodiversity is worth preserving for this alone.

The ocean is good for our health in other ways. Both Ireland’s Environmental Protection Agency and the European Union have funded projects to develop ‘blue spaces’ such as coastal areas to improve health and wellbeing.

Sometimes we damage the ocean unintentionally as we have done with plastic. The highly progressive ban on plastic bags in Ireland enacted in 2002 was primarily to protect against litter on land. It predated the 2004 seminal paper in the journal Science that first noted the presence of microplastics in beaches.

Yet the ban was prescient: research shows that microplastics are in deep marine sediments, in the polyps of corals, and even in the poos of whale sharks.

Microplastics are everywhere, and larger plastics are caught in gyres and persist throughout the world’s oceans. People have responded hugely to this issue and campaigned widely and must take much credit for the European-wide ban on many single-use plastics that will come into force in 2021. 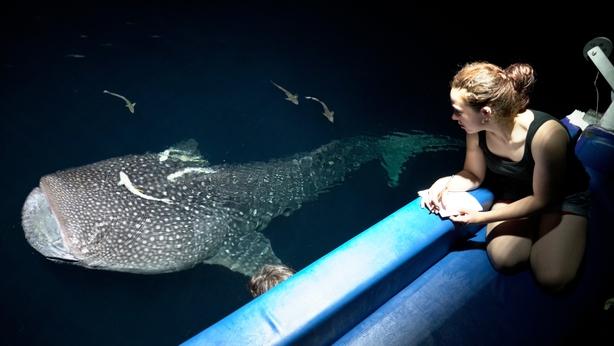 NUIG PhD student Alina Wieczorek observing whale shark suction feeding on plankton at the surface at night as part of a wider project investigating how whale sharks might be exposed to microplastics. Photo: Dawid Szlaga.

In fisheries, scientists can generate data in the field, develop models, and improve statistical analyses, to ensure accurate estimates of maximum sustainable take are passed to the policy makers.

But despite these efforts, only 67% of the world’s fish stocks are fished sustainably: 33% are overfished. As consumers, we can all look for seafood that is certified as sustainable, and pressurise our favourite shops and markets to supply it, and we can support other campaigns.

In the last few years, due to sustained public pressure, the practice of discarding caught fish at sea, because the boat had no permission to catch that species, has been banned by the EU, as has trawling below 800 m.

Read: Into the blue space: the joys of outdoor swimming

On June 21st, Irish scientists will participate in Ocean Sampling Day – a world-wide initiative to sample simultaneously and identically a few litres of water.

The filtered residue will be subjected to DNA sequencing which is one of the most effective ways to detect invasive species (due to small larvae being in the water column) before they become widespread.

Invasive species can be hugely damaging to the marine environment, outcompeting and smothering other life and reducing diversity, and they are often first detected by knowledgable members of the public. Most recently divers found the southern European Golden Kelp species Laminaria ochroleuca off Mayo. 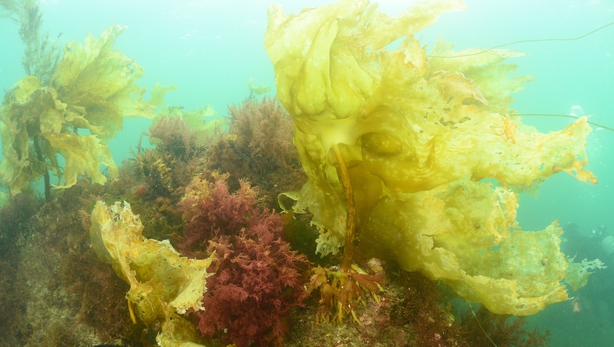 Golden kelp, an invasive species discovered off the Mayo Coast by divers.

Marine scientists study climate in numerous ways. Physicists study the exchange of greenhouse gases and heat between the upper ocean and lower atmosphere – processes that govern both weather and climate, while chemists study ocean acidification under increasing CO2 levels.

Marine animals, particularly those with a calcium carbonate shell or skeleton, are extremely vulnerable to ocean acidification as a lower pH hinders mineralisation. From a better understanding of the physical and chemical processes involved in ocean climate change, scientists are able to model and predict future climate more accurately, and thus empower politicians to act in the common interest.

Lowering our individual carbon footprints can impact the overall carbon load on the planet if enough of us engage, but lobbying governments for better public transport, investment in renewable energy and other wide-reaching policies that will help us reach our carbon targets under the Paris Agreement on action to combat climate change will have far greater impacts. Our oceans need us to meet these targets.

From RTÉ Six One News, climate change protests held across the country.

This year alone has seen a remarkable increase in environmental activism. Children, led by 16-year old Swede Greta Thunberg have come out of school to strike for climate. Extinction Rebellion have, through peaceful protest alone, caused both the Irish and British governments to declare a climate emergency. We have seen a ‘green wave’ in both the local and EU elections.

By the end of this year, both myself and my colleagues will have spent months at sea between us in all the oceans of the world. We will have dropped gravity cores in the Artic, studied the air-sea interface in the Antarctic, taught a climate change course on a German research vessel, and studied our own changing shorelines.

The latter is incredibly important given that two million Irish citizens live within 5km of the coast. So on this World Oceans Day, let us all appreciate the wonderful things that the ocean does for us, and think a little about how we all might protect its health for future generations.