Analysis: how a rugby tournament a century ago ushered in a new era in international rugby and may be considered a forerunner of the Rugby World Cup

While football has often been associated with the First World War, rugby's connections with the conflict are less familiar, but also arguably more significant. For it was rugby union which historically identified itself as the most patriotic of British team games, both within its homeland and across the empire.

As its name suggests, this 15-a-side and, until the advent of professionalism in 1995, resolutely amateur version of the sport had its roots in the network of English "public" (i.e. private) schools including, most famously, Rugby School in Warwickshire. These privileged institutions also shaped the game’s value system within the universities and the leading clubs, as well as the armed forces, with the result that rugby’s prevailing ethos came to combine unashamed elitism with overt militarism.

When war was declared in August 1914, the game’s administrators cancelled fixtures and made grounds available to military authorities. Players were encouraged to volunteer and responded enthusiastically, often joining up with club-mates. Their model was Edgar Mobbs of Northampton and England, who led a "sportsman’s" company into his local regiment, most of whom (including Mobbs) would not survive the war. 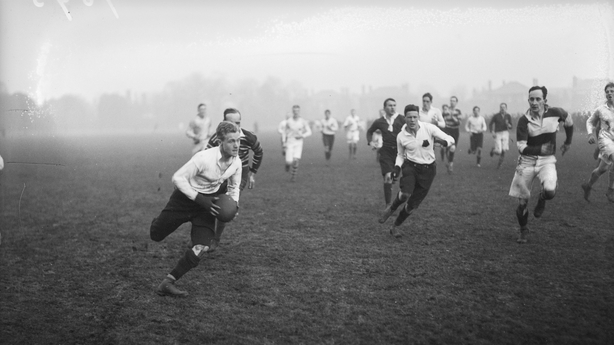 In total, 27 England internationals lost their lives, alongside 10 from Ireland, 30 from Scotland (proportionately the heaviest toll) and 13 from Wales, together with nine Australians, 13 New Zealanders and five South Africans. This very visible sacrifice undoubtedly helped to legitimize rugby’s claim to be the British empire’s most loyal sport.

Significantly, the 1914-1918 hostilities did not put a complete stop to rugby matches, as the War Office encouraged representative games between military selections, which were designed to keep up morale both at home and within the forces. It was against this backdrop that the King’s Cup, known formally as the Inter-Service Tournament, was held in the spring of 1919, just a few months after the Armistice of November 11th 1918 had brought the devastation of war to an end.

The teams involved highlighted the event’s combined military origins and imperial aspirations. The British army’s line-up brought together English, Irish, Scottish and Welsh players under the official title of "Mother Country". This composite side was joined by the Royal Air Force, which notably included the future England captain, RFU President and Conservative Member of Parliament, Wavell Wakefield. 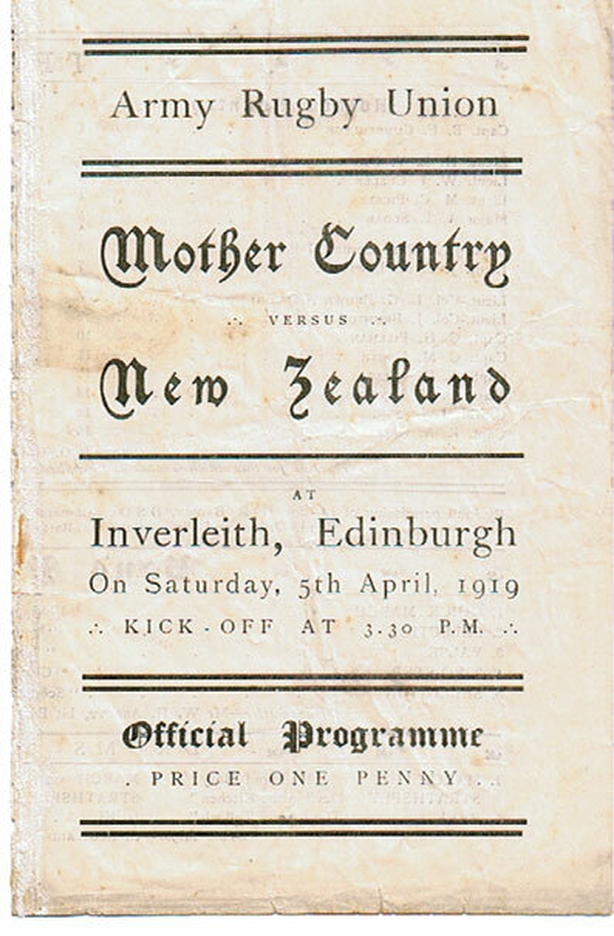 Programme for the match between the Mother Country and New Zealand service teams in 1919. Photo: Public domain

These British representatives would take on selections from the southern hemisphere dominions of Australia, New Zealand and South Africa, together with Canada, which was included with a view to popularising the game there. The competition was organised on a league basis at venues spread across England, as well as in Edinburgh and Swansea.

In a sign of things to come, New Zealand’s military representatives dominated the event, winning the final play-off against the "Mother Country" 9-3 at Twickenham on April 16th 1919. Three days later, their captain, Jimmy Ryan, who had played four times for the All Blacks before the war, was presented with the silver cup by George V that the king had personally donated as the tournament prize. Among the more striking aspects of this deciding match was the relative proportion of officers to other ranks in the two teams that took the field that day. While the victorious New Zealand side included one officer and 14 others, the "Mother Country" selection was made up of 14 officers and one other.

It is also revealing of British perceptions at this time that France was not invited to take part in the competition, despite the French being established participants in the annual Five Nations Championship and wartime allies. Moreover, French rugby had suffered similarly heavy losses during the conflict, with 24 internationals killed. In what remains the most striking example of this carnage, no fewer than 15 of the 30 players involved in the 1914 championship quarter-final between Bayonne and Perpignan perished in the ensuing conflict.

Under these circumstances, the French understandably objected to their exclusion and were granted an exhibition match against the victorious New Zealanders at Twickenham, three days after the tournament final, with George V once more in attendance. Predictably, the men in black again prevailed 20-3, also going on to win a return match in Paris, although by a much-reduced margin of 16-10.

The most conspicuous absentee from this international celebration of the restoration of peace, together with sporting normality, was the great Dave Gallaher. Originally from Ramelton in Co Donegal, Gallaher had captained the first New Zealand tourists, the "Original All Blacks", on their triumphant tour of Britain, Ireland and France in 1905 and 1906. This durably influential figure perished in the Battle of Passchendaele in 1917, one of four brothers who served in the war and of whom just one survived.

Although undoubtedly designed to bolster imperial sentiment in the wake of the Great War, the Inter-Service Tournament of 1919 ushered in a new era in international rugby and may consequently be considered a forerunner of today’s Rugby World Cup. Introduced in 1987, this modern competition paved the way for what is now a thoroughly professional and increasingly globalised, rugby world. With its ninth edition kicking off in Japan in September 2019, the participating nations will doubtless be preparing battle plans for the coming ‘campaign’. A century on from the King’s Cup of 1919, such familiar sporting metaphors may usefully remind us of rugby’s remarkable links with the so-called "greater game" of the First World War.